I’ve been in and to five weddings this year. Two were in May, one was in August, mine was in September, and the latest one was just this past weekend on December 7. I’ve been to some weddings where I really didn’t enjoy being a guest. I’ve been to some weddings where I felt out of place amongst the other guests. But this wedding was magical. After watching Katie and Tristan literally fall in love before my eyes, they felt like my couple.

I met Katie and Tristan at school back in 2014, when the three of us enrolled in The National Praise and Worship Institute at Trevecca Nazarene University in Nashville, Tennessee. That is a mouthful. I know. Katie was my roommate and bandmate, and halfway through the program, Tristan joined our band as well. They are both stupid talented musicians.

My husband and I left after work Thursday to drive all the way to Bristol, which sits on the Virginia-Tennessee line. We stayed in this Airbnb, although we didn’t spend much time in the city. We got in late, around 10:45pm and we left by 10am the next day. We were greeted by the homeowner at the door and were shown to our four-room suite in his gothic style home. It sounded like it was going to be super creepy, and it honestly was not. It was a great experience. It was a little warm, but our host helped us fix that.

We drove the second leg of our journey on Friday morning and got into Nashville around  2pm. Jonathan got a tour of my college per his request. He was just as underwhelmed as I was for the two years I attended. Following the tour, we got Jonathan a fresh haircut and then we checked into Airbnb #2, which happened to be in the best location for the weekend. It was minutes from the wedding venue and minutes from the newlyweds’ new apartment.

Friday night, we all had the rehearsal at the venue, led by their coordinator who was an absolute professional. Afterwards, I went with the bridesmaids to Chuy’s and Jonathan went with the groomsmen to go axe throwing. Seriously. This is a thing that people do now. 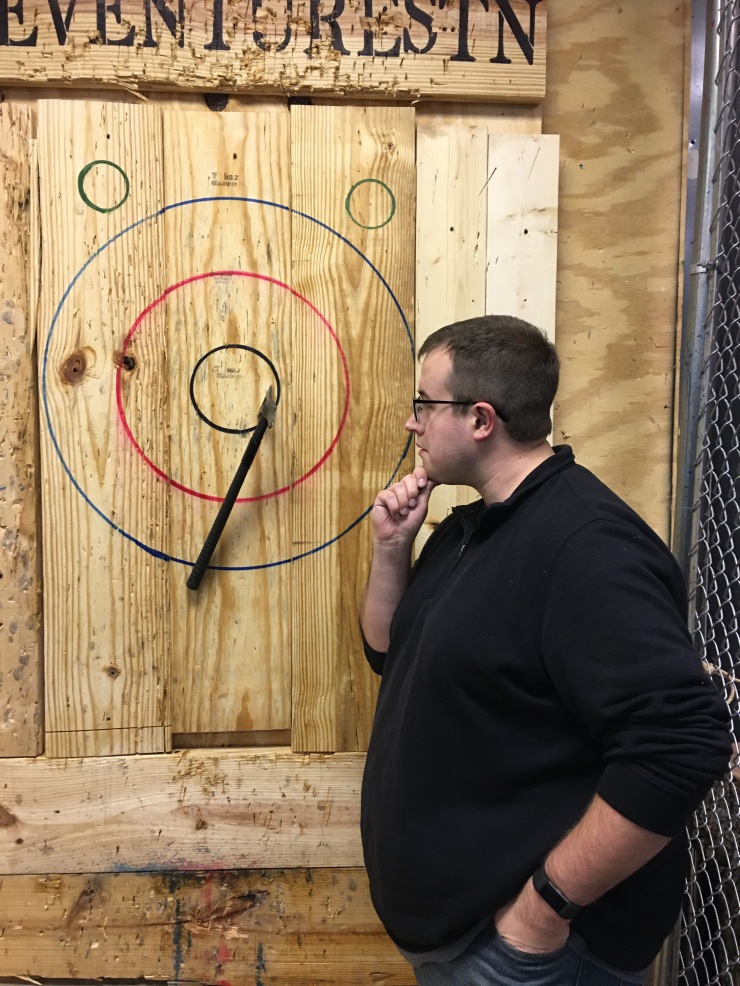 Here’s my proud husband after his second attempt. Apparently, the beginner’s luck wore off shortly after.

I actually was firstly, still recovering from my throat injury, and secondly, fighting a nasty sinus infection, and decided after dinner to go home and rest. I cannot tell you how many tissues I went through this weekend.

The following morning, Jonathan dropped me off at Katie’s mom’s house and we all got ready together. Katie’s cousin did my hair, which was beautiful. Her cousin also made an unsavory remark about it looking like I have postpartum hair loss. That was not appreciated. Here’s what the back of the hair looked like.

As far as the ceremony goes, I have never cried harder at a wedding. It was such an emotional time for me, watching my couple get married. Heck, I even inserted myself into the speeches. I had a great speech, by the way. It was very tasteful. 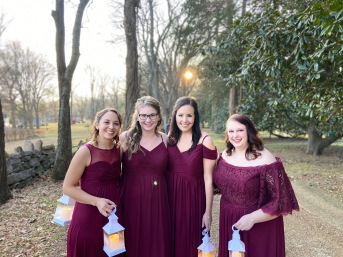 There’s me with the three other bridesmaids, me with my husband, and two newlywed couples!

The next day was a free day and I expected that we’d have all these grand plans, but my body said NO. Not only did I suffer from sinus mumbo jumbo this day, but my symptoms were also accompanied by horrible nausea. We managed to watch our church online from our king-size bed, and then gather ourselves together to catch the post-wedding brunch that was supposed to be happening across town at Katie’s favorite, Bob Evans. When we got there, the wait was one hour. My nausea demanded food, so I hopped next door for a hash brown. Once there, I found there was live music….at 10am…on a Sunday…..at McDonald’s. Oh, Nashville, how I love you.

Shortly after sitting down with my hash brown, the entire rest of the wedding people came over from Bob Evans, claiming I had the right idea all along. We took up three tables, danced to (semi-) live music in the restaurant and talked for two hours. I’ve never been in a McDonald’s that long and had that much fun.

Later on that day, after much rest, it was time for our first official double date with the newlyweds. We went to Gaylord Opryland Hotel and looked at lights together. It was a wonderful experience. 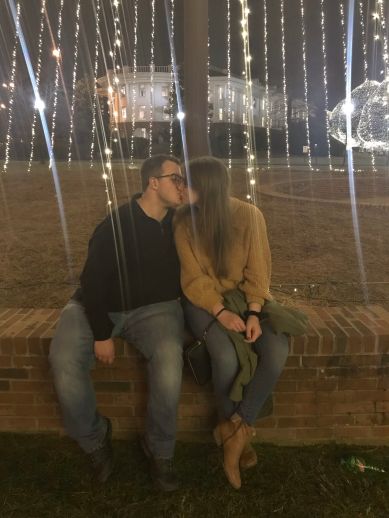 While at the hotel, we watched a big water show and I think it must have jacked up my camera, because everything looked a little fuzzy after that.

After a tour of the newlywed’s apartment and making off with some of their leftover red velvet wedding cupcakes, it was time to rest up for the drive back home. Jonathan and I got up Monday and packed up the car and headed for Frothy Monkey on 12 South. We got delicious breakfast, and as I had hoped, he got some coffee. Afterwards, we walked a couple blocks down to the I Believe in Nashville mural and got some pictures, including this one which I’ve placed next to new-to-town Sarah five years ago.

The ride home was long, but was made better by listening to one of my previous Audible purchases, the audiobook for Sisters First by Barbara Pierce Bush and Jenna Bush Hager. We made it home around 9pm and it was back to the grind.

We returned to work today and as soon as I got to work, I realized I had a flat tire that needed to be plugged very quickly. I was very glad this did not happen on our road trip.

As far as Nashville goes, I would expect to live there again one day. Who knows? Maybe it’ll be sooner than later.