This past weekend was everything! It started out waking up early to do my hair, but finding that it was humid and rainy, and it just wasn’t worth the effort. So I put on a rain jacket, went to get an oil change that took almost an hour, and headed off to my makeup trial.

My makeup artist was named Nika, and she just looked like someone who would be a makeup artist. She was good, too. The makeup took some getting used to but photographed very well.

After my makeup trial, I grabbed my stuff and picked up my Maid of Honor cousins Michelle and Savannah, and got a text from my best friend Mary Kate with the address for our weekend destination. I was convinced we were heading east for the trip, but ended up going northwest to Lake Anna.

The drive to Lake Anna was not bad, but there was a bit of a damper when we realized my phone had gotten confused and had sent me to my best friend’s last known location, thirty minutes north of our destination. So, we spent an extra hour driving.

Finally, we arrived at what I would find out is her aunt and uncle’s lake house. Everyone that I had hoped could come (the locals) came. That meant that I had six girls getting together to celebrate me. Honestly, it was so sweet. We got dressed up to go to dinner at a nearby restaurant. I had shrimp tacos, which were great. We had a fun evening together, and watched Aquamarine, which is actually one of the greatest movies ever. 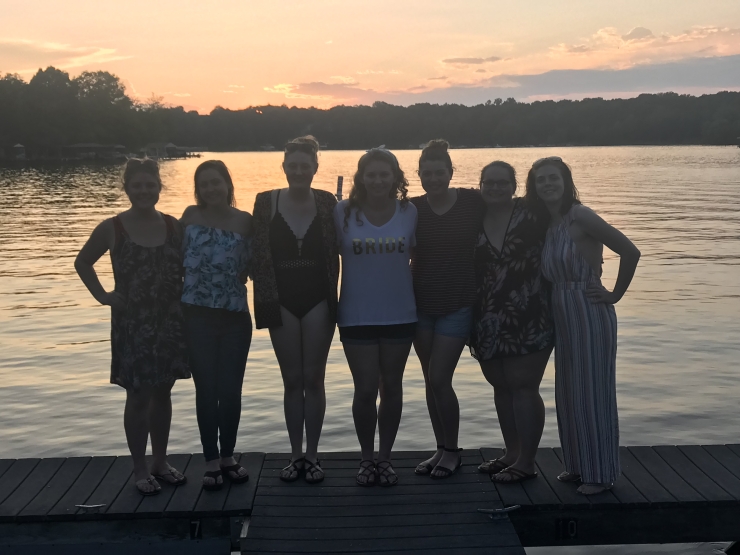 Saturday, we spent the entire day on the lake, which was just at the end of the street. Mary Kate’s uncle took us out on the boat and they went knee boarding and tubing. It was a really great time. I had planned on getting on the tube, but there were quite a few good wipeouts and I decided to not. But I really enjoyed just being on the front of the boat, going fast. I finally participated a little bit when I took up Mary Kate’s cousin on his offer to give me a ride on the jet ski. It was a blast, although, I braced with my knees the entire time and got super sore.

We had a cookout in the evening, and we went for a night boat ride. We went way out into the lake and actually caught a fireworks show. To top off the evening, we also had s’mores. It was just the best time. I could not have asked for a better bachelorette. Mary Kate put a lot of time into this.

What was actually difficult was waking up at 3:30am on Sunday morning with Michelle and Savannah and getting ready for work. Sunday was a day of pure exhaustion, and truthfully, I don’t think it has worn off completely.

The next wedding event on the calendar is my first rehearsal with my pianist for the wedding. I am signing a song at the end of cocktail hour. I cannot wait.